Citizens4change started ten years ago in the slum of Nyawita, Kisumu, Kenya.  At that time, in order to assist street children James and Alice Samo (Kenyan nationals) , working with Paul and Shirley Barter (in the UK)  set up two coffee shops in Chandlers Ford and Romsey in Hampshire, the profits of which supported the Life Centre school by paying teachers and providing basic education.

The classrooms were crude and crowded in the early days, but through fund-raising, donations and the addition later of a nursery facility, the school has gone from strength to strength now boasting all years in primary as well as an emerging high school.

Since that time, one of the original coffee shop in Chandlers Ford closed putting enormous strain on the remaining one in Romsey to perform to cover all the costs of running the school.  It has always been the intention of the charity to help the project become self-sufficient so. as the school had developed in Tom Myboya (a better area after the original slum buildings were demolished in 2015), James and Alice were encouraged to find working families to join the school and a fee-paying system was introduced to assist the ever-increasing costs.

Since the beginning c4c has encouraged regular donations from supporters sponsoring the project.  In the early days it was difficult to track families, who were often forced to move around, but recently as the schools success has allowed, many now stay with the programme and actually take their national exams with us.  This now means that ‘topping up’ fees coming in from the poorest families in the slum actually helps the school become independent.  In 2018 c4c relaunched this programme and now have some supporters giving £10 per month (gift-aided makes it £12).

Many supporters over the years have bought gifts for friends and family.  These have mainly consisted of a chicken or goat-given out as we visit, and very gratefully received. 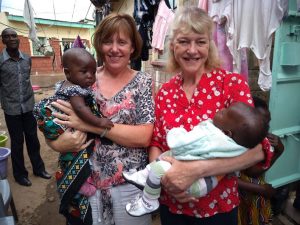 This year we have extended this idea to include basic stationary items for the classroom.  Each parent has been asked to provide exercise books, pens, pencils nd one reading book.  As you can imagine this is  tall order for those who can hardly afford to eat!  For just £5 we can help one family.  If you have received such a gift this year, we would like to say Asante (Thank you).

Please watch the film Life Centre 2018 on You Tube and see how this makes a difference.