After eighteen months of not being able to go out to Kenya due to an impending operation on trustee Shirley’s knee, we eventually joined forces with three Yellow Dot nursery staff and flew out early in April 2015. 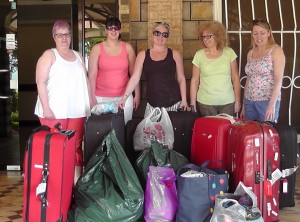 In the party were Paul and Shirley Barter (founding trustees) with Jude Gregory (Asante manager), Kathy Bate (primary school teacher) and Maryanne Strickland, Carolyn Moore and Steph Venier from Yellow Dot Nurseries.  C4c have received so much support from Yellow Dot who have been fundraising to assist the new nursery site close to the  primary school.  This year they have also been collecting shoes from the parents to give to Alice to sell at a fair price to parents who need assistance.  Everyone had a two large suitcase allowance so we travelled with 16 large suitcases filled with shoes and stationary gifts.

C4c are extremely proud of the fact that they have now achieved the full education system from age 0 to 15 years.  With the addition of the new Daycare Centre alongside the nursery for working mums and the addition of classroom 8 for the top class of the primary, this now means pupils can graduate with the equivalent of education up to GCSE standard and are equipped for work.  Despite this, most of year 9 who graduate at the end of this year would like to go on to high school and fulfil their ambitions to be accountants, lawyers, doctors, nurses, journalists and many other careers.  For this reason c4c are launching their sponsorship programme later this year.